Okay so it has been a while, and that’s partly because I don’t have many interesting links to share, because I’ve been spending less time on the internets. Facebook has seemed less and less interesting lately. Like for every one post that’s cool, there are nine that I don’t care about. Anyone else feeling this way? But also I’m on the computer less so it’s harder to bookmark things even when I find something, because it’s on the iPhone.

Whatevs. What has been going on here since we got back from our little escapade to Fontainbleau? I had a wonderful week of staycation with Littlest, visiting playgrounds and reading books. With the improvement in the weather and his growing walking skills we’ve been able to take him out into the yard which he is loving. Today he brought me his shoes and said “Ga” (his new word for when he’s asking for something) and we had to explain that no, it was raining and gross out. 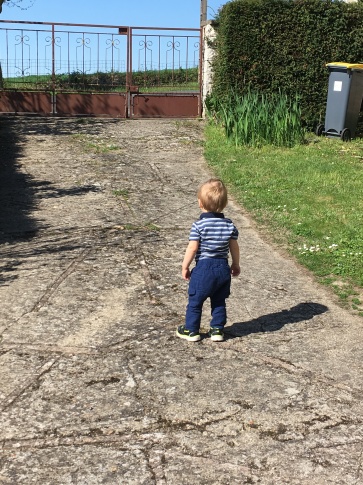 My thesis advisor from my master’s degree was magically in town this past week and we were able to eat dinner together. It was like a breath of air from another life and I really enjoyed it. Littlest also seems to be letting go of his mama-only phase so it’s been more enjoyable and freeing to be out since I’m confident he’s having a wild time with his dad.

We’ve been working on some new songs with the band which has meant meeting up more often. And I’m starting to look for a new car since I’m tired of putting Littlest in my steamy car on hot days. No AC and no electronic key for locking the car is a drag with an infant.

These next few weeks shoudn’t be too stressful since they are full of public holidays. But in less than three weeks I’ll be off to Warsaw with my students. Hopefully Littlest’s good mood will last through that so I can feel good about leaving him behind.

Inside The Secret Mind of a 3-year-old: Why they defy you even though they know better and how to handle it with one magic tool: Beyond the “magic tool” that is more complicated than the click-bait part of the title suggests, this was a fascinating article even though my toddler is still a ways off from the defiance phase.

Check out Los Feliz Daycare on Twitter for some laughs.

One thought on “The Past Weeks”

What do you think? Cancel reply